The problem for the world’s most expensive spice 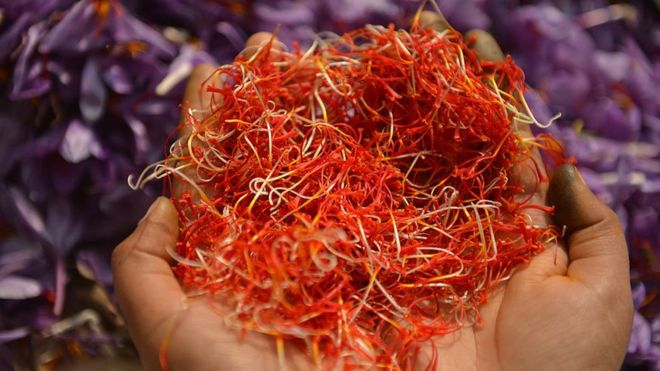 The spice saffron, as well as being famously expensive, is packed with antioxidants. It is said to help combat depression and lower blood pressure, to soften your skin and hair and is essential in a broad range of dishes from Swedish buns to paella. So what’s stopping it becoming as fashionable as turmeric and cinnamon? Is it just its high price?

In my palm I have five tiny strands, like pieces of slightly fraying dark red sewing thread, which smell rather like a fruity tobacco.

Four of them I’m placing into a cup and dousing with warm water; they’re destined for the cooking pot. The fifth I place on my tongue.

I’m told this taste test is essential to check that what I’m using is proper saffron. After all, if you’ve spent more than £5 for a gram of anything, you want to be sure it’s the real thing.

And after a few seconds I’m gratified that, despite having languished at the back of my spice cupboard for quite some time, the tiny threads are still capable of imparting the heady floral aroma, the honey notes, and the slight astringency I’ve been promised.

And the strands in the water are leaching an orangey hue, as they should.

Saffron is central to national cuisines from Morocco to the Himalayas, essential to dishes from risotto Milanese to Kashmiri curry. As well as being a sought-after culinary ingredient the versatile spice is also increasingly being added to medications and cosmetics.

What is saffron used for?

Cleopatra used it to infuse her bathwater.

Alexander the Great bathed his battle wounds with it and drank saffron tea.

In the 14th Century it was used to combat bubonic plague

It is a key ingredient in dishes from Spanish paella, to Persian rice dishes and Indian curries

It is added to products from coffee to salt, skin creams to shampoos.

Saffron has been used in traditional medicine to treat menstrual problems, depression, asthma and sexual dysfunction

It has been trialled in research for conditions from memory loss to cancer, but the evidence so far is inconclusive

And yet the reputation of the spice, dubbed “red gold”, still does not glister quite as brightly as perhaps it should.

Keith Alaniz, an American soldier-turned-entrepreneur, thinks he understands why.

After serving in Afghanistan, he and two other veterans decided to establish a social enterprise based on a crop that could offer locals better returns than illegal opium poppy cultivation.

Their company, Rumi Spice, buys saffron crocuses from local growers and employs 380 Afghan women to do the painstaking work of separating the tiny rust-red stigmas in the centre of the crocus from its petals, stamens and the rest of the flower head, prior to being dried and packed for export.

It’s those long laborious hours of work that makes saffron so expensive. Rumi Spice sells its saffron – higher grade than the one from my kitchen cupboard – for $18 (£14) per gram.

Mr Alaniz says saffron’s high price tag is the reason it has so much promise in war torn Afghanistan. But it is also in many ways the root of its biggest problem: it makes it extremely tempting for counterfeiters.

“A lot of the reason saffron hasn’t taken off is because of the adulteration that you’ve seen.”

He says they’re battling against the disappointment some shoppers have felt in the past. They’ve spent money on an extravagant product, only to find it didn’t have much flavour because it was substandard or even fake saffron.

“What we’ve seen with chefs and foodies is, once they see what high quality saffron tastes like, they’re blown away by the flavour and aroma,” says Mr Alaniz.

Their saffron is now doing well with specialist buyers and high end restaurants. And they hope to rebuild its reputation amongst ordinary consumers in the same way.

But the plan will only work if the product consistently delivers on its promise; and despite recent efforts to introduce more rigorous standards, stories continue to circulate of horse hairs, corn silks, and shredded paper, all masquerading as saffron.

Earlier this year there were reports of the synthetic food colourings tartrazine and sunset yellow being used in counterfeit powdered saffron.

Sally Francis, botanist and saffron grower, says only a few weeks ago she saw safflower, a common substitute from the unrelated thistle family, being sold as saffron in a street market in the Netherlands. And she’s met plenty of tourists returning from exotic holidays with what they thought was bargain saffron, only to find out it was bogus.

Even legitimate saffron can vary enormously depending on how it’s produced, she says.

“You can have a huge range in saffron quality, with no indication on the packaging as to what you are buying,” says Ms Francis.

Often it’s simply that careless harvesting has meant some of the flavourless parts of the crocus have found their way into the final mix. It’s still saffron but rather than “packing a punch” like the purest spice, what you’re basically getting is “expensive yellow food colouring,” she says.

“The difference between a grade I and a grade III that’s huge. You’re talking Trabant and Lamborghini,” she says.

How to check if saffron is genuine

Check it has strands which are frayed at one end

It should taste sweet and bitter at the same time

Ms Francis produces saffron on a small scale in Norfolk. The UK is a tiny player in the global saffron market, despite a saffron tradition going back several centuries.

But it is one of many countries from New Zealand to Germany, Greece to India, where producers are recognising the potential for high-grade saffron, with transparent country of origin and quality labelling, to reassure consumers that it is worth the high price tag.

In Iran which supplies around 90% of the world’s saffron, there are signs that traceability and certification are becoming priorities.

“We are trying to show the quality of Iranian saffron to other people in the world,” says Mehrdad Rowhani, chief executive of a family-owned wholesaler from Mashhad, the city at the heart of Iran’s saffron growing region.

After years hampered by American sanctions, which meant a lot of Iranian saffron ended up exported in bulk to be repackaged and sold as “produce of Spain” or sold via backdoor bartering deals, Iranian producers are again able to sell directly to western customers.

This could have more impact than anything else on the standard of saffron available to ordinary shoppers, as Iran’s producers embrace the opportunity to emphasise the authenticity, origin and quality of their product.

Mr Rowhani says his firm’s exports have already more than doubled since sanctions were lifted.

“We started exporting to the United States and we have good – and big – customers from there,” he says.

Now he’s focusing on improving every step of the production process from planting, harvesting and drying, to selling in smaller, better designed packaging.

“When they see Persian saffron is of high quality, they want to buy more,” he adds.