Why the destruction of Kawa’s statue in Afrin matters 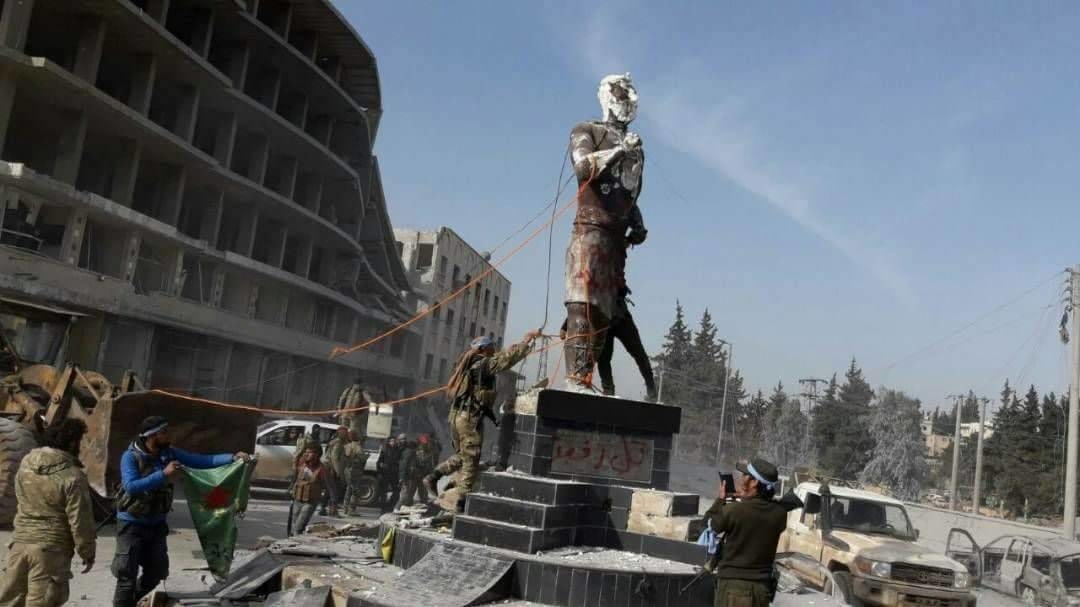 As Turkish troops and their jihadist proxies in the Free Syrian Army (FSA) declare the fall of the Kurdish enclave of Afrin in northern Syria, serious questions are being raised across the world about the legality of this most blatant violation of international law. And while the profound humanitarian suffering caused by these war crimes – coincidentally on the exact anniversary of the Halabja massacre – has rightly drawn condemnation, here is why the destruction of the Kawa statue by occupying forces remains the most potent symbol of the assault.

In the Book of Kings (Shahnameh) by the Persian poet Ferdowsi, we encounter a legendary figure who led an uprising against a foreign ruler called Zahak.

Zahak is depicted as an evil tyrant backed by an immense army who commits numerous acts of murder and deception, supported by religious figures and their appropriate narratives. We read that Zahak is, in reality, a protégé of the devil himself – so much so that two snakes grow on his shoulders that must be regularly fed with human brains else they turn on Zahak himself.

In a display of public propaganda – to extend an “olive branch” to surrounding communities – Zahak holds a public reception to foster his image as a legitimate and benevolent ruler. It is here that the blacksmith Kawa openly denounces Zahak’s charade and leaves the ceremony in anger, removing his blacksmiths’ apron and raising it upon a spear as a symbol of rebellion: the so-called Derafsh Kaviani banner.

This ancient legend is cited as one of the most primeval endorsements of popular action against despotism, appearing nearly 700 years before the French Revolution. Even today it is loaded with significant emotional and political symbolism, and not just for Kurds and Persians. It should come as no surprise, therefore, that the destruction of such a profound symbol of liberty, independence and resistance to foreign encroachment appeared so significant to the occupying Turkish forces in Afrin.

The first images to emerge of Turkish troops and their jihadist allies in Afrin was the footage of the Kawa statue being riddled with bullets and pulled down. The analogy of the foreign tyrant’s hatred for symbols of rebellion and struggle for freedom cannot be overstated. There was also a strange sense of déjà vu in the footage, resonant of other Turkish-backed forces, most notably ISIS, destroying ancient cultural sites and relics. Attempts to erase historical identity are a familiar weapon of war.

Even Turkish President Recep Tayyip Erdogan’s official declaration of victory and the specific expressions he used appear significant against the backdrop of a despot’s desperate attempt to promote his crimes as legitimate and lawful. Curiously, he insisted upon highlighting the removal of the “terrorist’s rags” and their substitution with the Turkish flag. A tyrant’s ostensible contempt for a plain blacksmith’s banner, combined with a vile ecstasy for its subsequent removal, appeared to be the most significant achievement of the Turkish army in Afrin.

Kawa, with his millenary symbolism, does indeed pose an ideological threat to all forces of tyranny and despotism. In another odd historical parallel, Kawa’s struggle was also against immense military might, backed by (religious) jins and monsters. Kawa’s chances of success also appeared slim in the face of what Machiavelli later called fortuna – the twists and turns of the global political luck, eclipsed by military might and the realpolitik interests of neighboring countries.

End of the Story

While the forces of Zahak today appear triumphant, with their red flag of bloodshed waving over the fallen statue of Kawa, the millenary wisdom of Ferdowsi unequivocally reminds us that even when the revolutionaries appear to have been crushed, their iron will, their thirst for freedom and independence will outlive all Zahaks by thousands of years.

Two millennia later, and for centuries to come, Kawa’s banner will be waving not only in a small enclave in northern Syria, but throughout a region where tyrants are kept awake by calls for liberty, justice and independence by the sons of Kawa the Blacksmith.

The very existence of this statue in the first place should have been a stark reminder to all tyrants and despots of the region that Kawa is not just a banner or an inanimate stone figure that can be physically demolished. It is a resilient fire that has outlived thousands of despots and foreign occupiers for millennia.