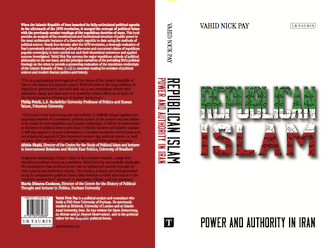 Vahid Nick Pay – When the Islamic Republic of Iran launched its fully-articulated political agenda in the aftermath of the 1979 revolution, it merged the concept of political Islam with the previously secular readings of the republican doctrine of state. This book provides an analysis of the constitutional and institutional structure of public power in the most emblematic instance of a theocratic republic to date: the Islamic Republic of Iran, using the methods of political science. Nearly four decades after the 1979 revolution, a thorough evaluation of Iran’s prevalently anti-modernist political discourse and concurrent claims of republican popular sovereignty is here carried out and their theoretical coherence and applied success investigated. Vahid Nick Pay surveys the major republican schools of political philosophy on the one hand, and the principal narratives of the prevailing Shi’a political theology on the other, to provide a pioneering evaluation of the republican credentials of the Islamic Republic of Iran.  Essential reading for scholars of political science and modern Iranian politics and history.

‘This is a painstaking interrogation of the claims of the Islamic Republic of Iran to the status of a republic proper. Well informed in the long tradition of republican government, the book sets out a neo-republican theory with admirable clarity and then uses it to powerful, critical effect in an audit of the structure and performance of Iranian institutions.’
Philip Pettit, L.S. Rockefeller University Professor of Politics and Human Values, Princeton University

‘This book is very  interesting and well-written. It skilfully brings together two important aspects of a prominent political system of the modern era that claims to be rooted in both Republican and Islamic credentials. It will be of interest both to students of political theory and those in Middle Eastern and Islamic studies. It will also appeal to anyone interested in a detailed academic institutional and constitutional analysis of this important modern day political system as well as many other scholars of comparable regional and international contexts.’
Afshin Shahi, Director of the Centre for the Study of Political Islam & Lecturer in International Relations and Middle East Politics, University of Bradford

‘A rigorous debunking of Iran’s claim to be a modern republic, using civic republican political theory as a yardstick. Vahid Nick Pay successfully challenges the assumption that political power can be legitimised entirely through its own cultural and historical context. This book is a timely and well-grounded study in comparative political theory that develops a viable alternative to the ‘multiple modernities’ approach in examining Islamic political argument.’
Maria Dimova-Cookson, Lecturer in Politics, University of Durham