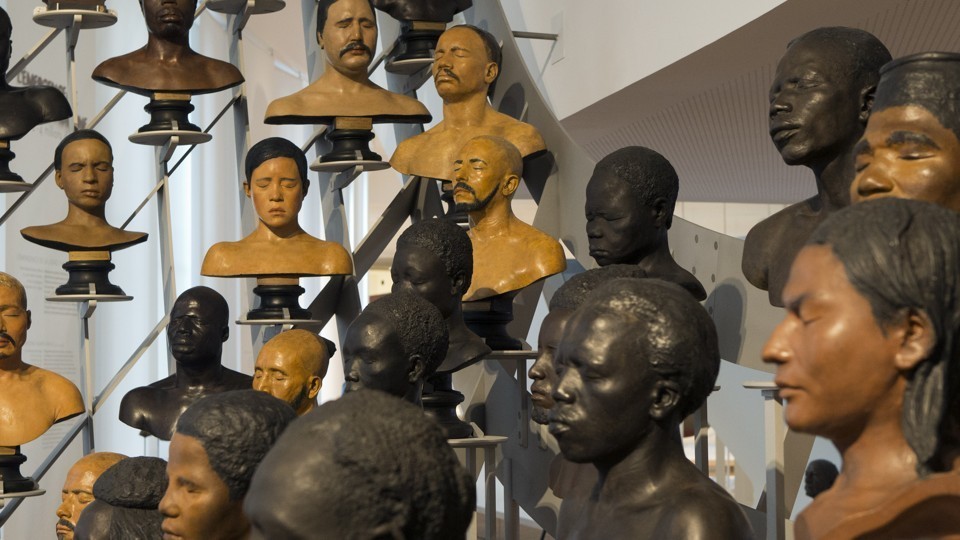 Geneticist David Reich used to study the living, but now he studies the dead.

The precipitating event came in the form of 40,000-year-old Neanderthal bones found in a Croatian cave. So well-preserved were the bones that they yielded enough DNA for sequencing, and it became Reich’s job in 2007 to analyze the DNA for signs that Neanderthals interbred with humans—a idea he was “deeply suspicious” of at the time.

To his surprise, the DNA revealed that humans and Neanderthals did interbreed in their time together in Europe. Possibly even more than once. Today, surprisingly, the people carrying the most Neanderthal DNA are not in Europe but in East Asia—likely due to the patterns of ancient human migration in Eurasia in the thousands of years after Neanderthals died out. All this painted a complicated but dynamic picture of human prehistory. Since the very beginning of our species, humans have been on the move; at times they replaced and at other times they mixed with the local population, first hominids like Neanderthals and later other humans.

Reich has since converted his lab at Harvard Medical School into a “factory” for studying ancient DNA. His new book, Who We Are and How We Got Here, charts the myriad ways the study of ancient DNA is lobbing bombs into the halls of established wisdom. In Europe, for example, ancient DNA is identifying waves of migrations into the continent, in which groups of people serially replaced, or nearly replaced, the local population.

This work is not without controversy, especially as these replacements can be difficult to explain. Reich once had German collaborators drop out of a study when the initial findings seemed to mirror too closely Nazi propaganda about the Aryan race. We discuss this and other aspects of his work below. Our conversation has been condensed and edited for clarity.

Sarah Zhang: You recently published two papers in which you analyzed over 600 genomes from ancient Europeans. In your book, you write you wanted to “build an American-style genomes factory” and “make ancient DNA industrial”? What does an ancient genome factory look like?

David Reich: What we do in our laboratory is we’ve really focused on trying to make data production efficient. We usually have several people working in parallel in a clean room on turning bones or teeth into powder. The powders are dissolved in a watery solution and the DNA is released and those are turned into a sequenceable form. That’s another step we now do on a robot, which processes 96 samples at once over a period of two days and turns them into sequenceable form. We’re constantly trying to find ways to reduce costs at every stage, so that we can reduce the amount of time it takes to process a sample.

Zhang: How much does it cost to process an ancient DNA sample right now?

Reich: In our hands, a successful sample costs less than $200. That’s only two or three times more than processing them on a present-day person. And maybe about one-third to one half of the samples we screen are successful at this point.

Zhang: Scientists recently reconstructed the face of Cheddar Man, a 10,000-year-old complete skeleton found in Britain. It became a bit of a story because they showed Cheddar Man had dark skin and blue eyes based on his DNA. Why is it that Cheddar Man looks so different from modern Europeans?

Reich: In Europe where we have the best data currently—although that will change over the coming years—we know a lot about how people have migrated. We know of multiple layers of population replacement over the last 50,000 years. Between 41,000 and 39,000 years ago in western Europe, the Neanderthals were replaced by modern human populations. The first modern human samples we have in Europe are about 40,000 years old and are genetically not at all related to present-day Europeans. They seem to be from extinct, dead-end groups.

After that, you see for the first time people related to later European hunter-gatherers who have contributed a little bit to present-day Europeans. That happens beginning 35,000 to 37,000 years ago. Then the ice sheets descend across northern Europe and a lot of these populations are chased into these refuges in the southern peninsulas of Europe. After the Ice Age, there’s a repeopling of northern Europe from the southwest, probably from Spain, and then also from the southeast, probably from Greece and maybe even from Anatolia, Turkey.

which almost completely replaces the hunter-gatherers with a small amount of mixture.

And then again, after 5,000 years ago, there’s this mass movement at the beginning of the Bronze Age of people from the steppe, who also probably bring these languages that are spoken by the great majority of Europeans today.

So in regard to Cheddar Man, he is from one of these groups that repeopled northern Europe from the south after the Ice Age. And this group was characterized by ancestry related to southeast Europeans. They did not have a lot of the skin-lightening mutations that are present in the first farmers and even more in the steppe pastoralists who come later. They don’t have the blond hair that is characteristic of many northern Europeans today. They do have the blue eyes that are characteristic of this region today. So you have this unusual look of dark skin and blue eyes.

Zhang: You’ve said that ancient DNA has changed the way we see archaeology from these time periods. How so?

Reich: Archaeology has always been political, especially in Europe. Archaeologists are very aware of the misuse of archaeology in the past, in the 20th century. There’s a very famous German archaeologist named Gustaf Kossinna, who was the first or one of the first to come up with the idea of “material culture.” Say, you see similar pots, and therefore you’re in a region where there was shared community and aspects of culture.

He went so far as to argue that when you see the spread of these pots, you’re actually seeing a spread of people and there’s a one-to-one mapping for those things. His ideas were used by the Nazis later, in propaganda, to argue that a particular group in Europe, the Aryans, expanded in all directions across Europe. He believed that the region where these people’s material culture was located is the natural homeland of the Aryan community, and the Germans were the natural inheritors of that. This was used to justify their expansionism in the propaganda that the Germans used in the run-up to the Second World War.

Zhang: You actually had German collaborators drop out of a study because of these exact concerns, right? One of them wrote, “We must(!) avoid … being compared with the so-called ‘siedlungsarchäologie Method’ from Gustaf Kossinna!”

Reich: Yeah, that’s right. I think one of the things the ancient DNA is showing is actually the Corded Ware culture does correspond coherently to a group of people. [Editor’s note: The Corded Ware made pottery with cord-like ornamentation and according to ancient DNA studies, they descended from steppe ancestry.] I think that was a very sensitive issue to some of our coauthors, and one of the coauthors resigned because he felt we were returning to that idea of migration in archaeology that pots are the same as people. There have been a fair number of other coauthors from different parts of continental Europe who shared this anxiety.

We responded to this by adding a lot of content to our papers to discuss these issues and contextualize them. Our results are actually almost diametrically opposite from what Kossina thought because these Corded Ware people come from the East, a place that Kossina would have despised as a source for them. But nevertheless it is true that there’s big population movements, and so I think what the DNA is doing is it’s forcing the hand of this discussion in archaeology, showing that in fact, major movements of people do occur. They are sometimes sharp and dramatic, and they involve large-scale population replacements over a relatively short period of time. We now can see that for the first time.

What the genetics is finding is often outside the range of what the archaeologists are discussing these days.

Zhang: I think at one point in your book you actually describe ancient DNA researchers as the “barbarians” at the gates of the study of history.

Zhang: Does it feel that way? Have you gotten into arguments with archaeologists over your findings?

Reich: I think archaeologists and linguists find it frustrating that we’re not trained in the language of archaeology and all these sensitivities like about Kossinna. Yet we have this really powerful tool which is this way of looking at things nobody has been able to look at before.

The point I was trying to make there was that even if we’re not always able to articulate the context of our findings very well, this is very new information, and a serious scholar really needs to take this on board. It’s dangerous. Barbarians may not talk in an educated and learned way but they have access to weapons and ways of looking at things that other people haven’t looked to. And time and again we’ve learned in the past that ignoring barbarians is a dangerous thing to do.

Zhang: As you say, the genetics data is now often ahead of the archaeology, and you keep finding these big, dramatic population replacements throughout human history that can’t yet be fully explained. How should we be thinking about these population replacements? Is there a danger in people interpreting or misinterpreting them as the result of one group’s superiority over another?Reich: We should think we really don’t know what we’re talking about. When you see these replacements of Neanderthals by modern humans or Europeans and Africans substantially replacing Native Americans in the last 500 years or the people who built Stonehenge, who were obviously extraordinarily sophisticated, being replaced from these people from the continent, it doesn’t say something about the innate potential of these people. But it rather says something about the different immune systems or cultural mismatch.

Zhang: On the point of immune systems, one of the hypotheses for why people from the steppe were so successful in spreading through Europe is that they brought the bubonic plague with them. Since the plague is endemic to Central Asia, they may have built up immunity but the European farmers they encountered had not.

The obvious parallel is Columbus bringing smallpox and other diseases to the New World, which we think of as this huge, world-changing event. It reminded me that huge migrations replacing previous populations have happened many times before in human history.

Zhang: You end the book noting that you are optimistic that your work is “exploding stereotypes, undercutting prejudice, and highlighting the connections among peoples not previously known to be related.” I imagine you started writing this a few years ago. Given today’s political climate, are you still as optimistic now as you were when you started writing the book?

Reich: I think so. I know there are extremists who are interested in genealogy and genetics. But I think those are very marginal people, and there’s, of course, a concern they may impinge on the mainstream.

But if you actually take any serious look at this data, it just confounds every stereotype. It’s revealing that the differences among populations we see today are actually only a few thousand years old at most and that everybody is mixed. I think that if you pay any attention to this world, and have any degree of seriousness, then you can’t come out feeling affirmed in the racist view of the world. You have to be more open to immigration. You have to be more open to the mixing of different peoples. That’s your own history.