The test of wills over Kurdistan begins 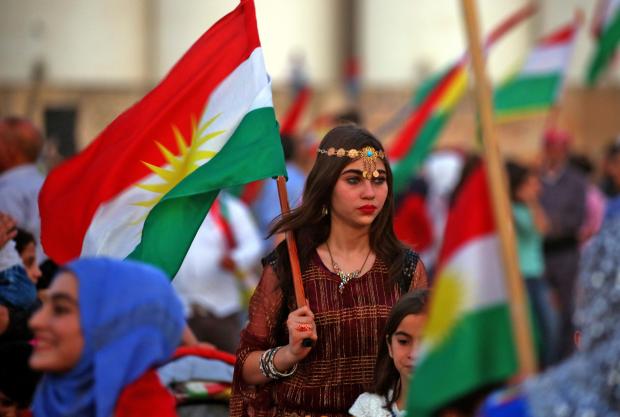 On Monday South (or Iraqi) Kurdistan held its referendum for independence. In polling that outside observers deemed free and fair, some 70% of eligible voters in Kurdistan and territories just south of the recognized autonomous region of Kurdistan turned out. Sparking fury in Turkey, Iran and Baghdad, over 92% of these voters chose ‘yes’ for Kurdistan to become independent.

How does one “revoke” the democratically expressed will of an entire people, however? In the calculus of President Erdogan, Prime Minister Abadi and Ayatollah Khamenei, one apparently does so by moving troops to encircle Kurdistan, closing its airports and trying to seal its land borders.

This is an old story threatening to repeat itself but even more glaringly than in the past. The only way to “revoke” the overwhelming desire of a people for independence is to occupy them militarily. Baghdad, Ankara and Tehran just clearly announced to the world that by whatever means necessary, including force, they wish to maintain colonial rule over South Kurdistan. There’s simply no other interpretation possible from their reaction to the referendum. While one might at least wonder and disagree about the preferences of Kurds in Turkish, Syrian and Iranian Kurdistan, the act of holding the referendum in “Iraqi” Kurdistan lifts the veil of lies and deceit and exposes the true nature Iraqi rule over that region and its people.

What’s more, the referendum itself was entirely legal. Nothing in the constitution of Iraq forbids such a referendum (in fact, Article 140 of that constitution called for a referendum in disputed territories ten years ago but was ignored by Baghdad), and the preamble of that same constitution states that Iraq is a “free union” of its people – meaning a voluntary union in any reasonable interpretation of the text. In response to ceaseless accusations from Baghdad about the illegality of the referendum, the Kurdistan Regional Government published a lengthy legal defense of this exercise in democracy, in addition to an even more lengthy overview of all the constitutional articles violated by Baghdad in the last twelve years ( http://cabinet.gov.krd/uploads/documents/2017/Constitutional_violations_Sept_24_2017.pdf ). These are the very violations that pushed Kurdistan into holding the referendum in the first place.

Yet Baghdad and its neighbours, by seeking to punish Kurdistan for freely asking its people what they really want, demonstrates ever more clearly why the Kurds need their independence. Under the terms of Kurdistan’s autonomy, the supposedly federal government in Baghdad is probably legally permitted to close Kurdistan’s airports and land borders and to ask foreign consulates to pack up and leave the region (but not to sack the Kurdish governor of Kirkuk, among other things).

This is the same government that refused to abide by constitutional articles mandating the establishment of a federal second chamber for regions and governorates, however, so that they might better pursue their interests within that government. This is the same government that illegally cut Kurdistan off from its share of the Iraqi national budget in 2014, refused to forward arms to the peshmerga fighting ISIS, and refused to abide by constitutional articles (112 and 115 mainly) mandating shared control of oil and gas resources in the country.

If all this can happen within the framework of Kurdistan’s autonomy, then clearly autonomy is not good enough to protect the people of Kurdistan from would-be dictators in Baghdad. A test of wills must therefore now begin. Either the people of South Kurdistan will secure their independence, or they will again fall under the ever-heavier yoke of an increasingly authoritarian Baghdad.

The rest of the world can either stand by and try to pretend that an entire people has not just clearly asked for its freedom, or they can work to promote reason and negotiations for a peaceful divorce between Kurdistan and Iraq. The latter option should be the preference of anyone with an ounce of humanity. There are also very solid arguments as to why this should be in the interests of the United States and other Western countries. In the end, such an approach should even be in the interests of the rest of Iraq – another war to repress people who don’t want to be part of Iraq simply isn’t worth it.

David Romano has been a Rudaw columnist since 2010. He holds the Thomas G. Strong Professor of Middle East Politics at Missouri State University and is the author of numerous publications on the Kurds and the Middle East.